This is the world’s first ultra-short projector with advanced laser display ( ALPD ) technology, which delivers up to 150 inches of full HD quality images in 50 centimeters, with product life up to 25,000 hours. To achieve user-friendly design goals, the high-tech product uses a compact, minimalist “box” design language, and carefully maintained the host and Bluetooth remote control design style consistency. In any corner of the room control the host, voice assistant quickly finds programs and other interactive ways for the user to bring a new movie viewing experience.

● Ultra short projection distance: the laser projector itself only needs to be placed 50cm away from the wall in order to deliver 150-inch screen projection
● Providing up to 150 inch TV experience: theater-class laser projection TV
● Ultra-short focal lens: the projector screen can be placed in the TV cabinet with the size adjusted to fit in your screen
● Fine-tuning images itself: you don’t need to manually focus the lens as it fine-tunes itself
● 5000 lumens: utilizes ALPD 3.0 laser light source tech, for high resolution of the projected image
● The remote control is powered by 2 x AAA battery ( not included )

Xiaomi first launched the Mi Laser Projector in June 2017 and it was well received in the market such that the company raked in sales of 10 million yuan just 2 hours after it went on its first sale. The device came with a 9999 yuan price tag and despite the hype, was only able to provide an FHD resolution. The company has now launched the MIJIA Laser Projector 4K version with the same design, same price tag but a higher 4K resolution.

In terms of design, the MIJIA Laser Projector 4K version bears a similar design to the Mijia Laser Projector that was launched last year but that model comes with a white colour scheme while the new MIJIA Laser Projector is dark gray. The rest of the specifications are mostly similar. The Mijia Laser Projector comes with a 0.233:1 large depth of field and has an ultra-short focal lens design. The projector screen can be placed in the TV cabinet with the size adjusted to fit in. The wall can also be used as the screen and so, it does not occupy too much indoor space. The design also eliminates the cumbersome problem of wires scattered everywhere. The Laser projector itself only needs to be placed 49cm away from the wall in order to deliver 150-inch screen projection. For a 120-inch screen, the distance reduces to 34cm. 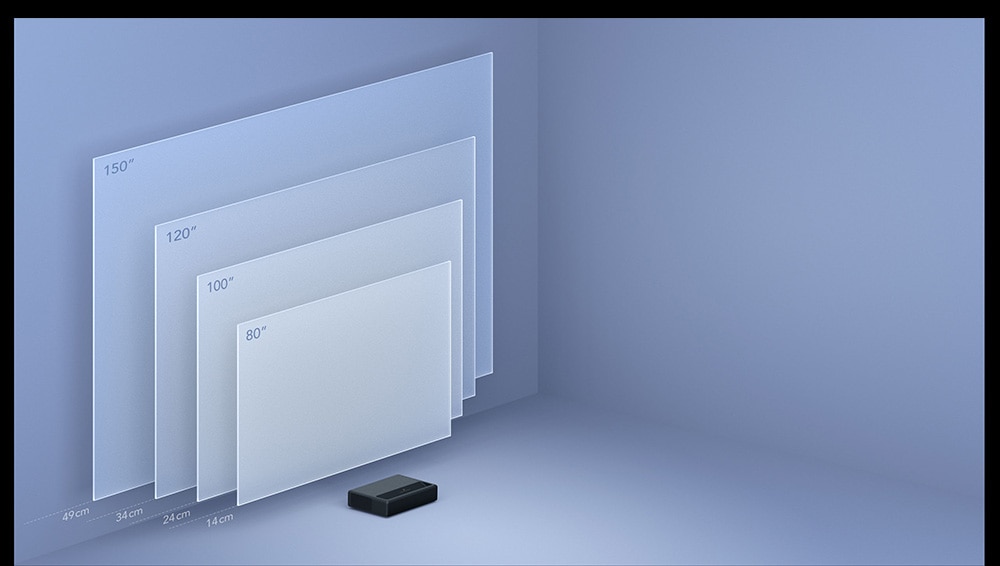 Xiaomi claims the laser light inside the projector has a shelve life of 25,0000 hours. That translates to up to 17 years usage if the projector is used for 4hours daily, meaning the laser is ultra-durable and long-lasting. Picture quality is assured as a result of the use of advanced laser fluorescence display technology (ALPD 3.0).

The projector provides a red light ratio of 16% to 18%, wide color gamut, color quasi, with contrast comparable to the laser studio 3000: 1 screen contrast. The light source brightness can reach up to 1500 lumens which are of theatre screen level. The projector also diffuses its direct light source, allowing for more eye protection.

In addition, the Mijia Laser 150″ projector is capable of providing theatre-level audio-visuals right in the comfort of the sitting room. It also comes built-in with all the content available on the MIUI TV. The device equally has its own remote control which supports the Xiaomi universal remote control app. That means the Xiaomi universal smart remote can be used to operate the sophisticated device.

Smart projectors are revolutionizing the way people view movies and play video games. They
read more
Home theatre systems have come a long way in recent years, and one of
read more
Having a home projector is an easy way to achieve a very large screen
read more
Xiaomi has launched a new laser projector in China, dubbed as Mi Laser Projector
read more
The Nebula Capsule is Anker’s first offering in the pico projector market. The projector
read more
Back to Top